Almost every credible (and non-credible) football journalist in the country has waxed lyrical about the decline of the Mighty Hawks, and the Considerably Less Mighty Roos. Both sides were finalists in 2016, but have gotten off to tough starts in 2017, a combined 0-8 through a month of footy.

Each rating is an inside-50 based efficiency measure, and we adjust each team based on their opponents. The following is our rating of the strength of the four opponents each team has so far played: 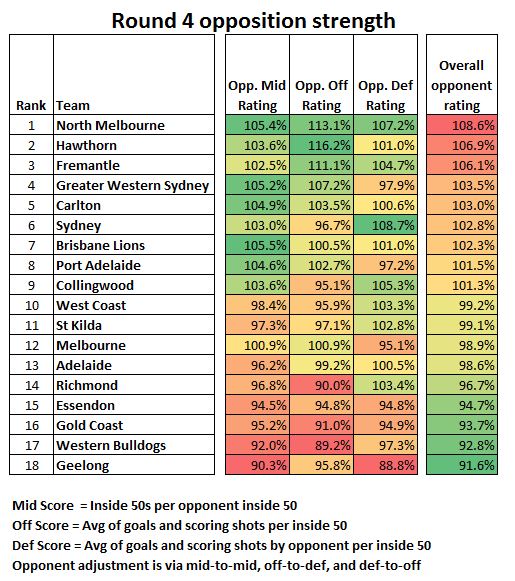 North Melbourne and Hawthorn have played relatively tough draw sets so far. At this stage, this should be treated with some caution, because every game is a quarter of the sample for each club.

It just so happens that most teams have faced a spread of sides so a couple of tough or soft opponents can stand out.

Hawthorn for instance is rated as having had a difficult draw due mostly to playing a highly rated Adelaide and a pretty well rated Geelong. Those two alone push the average up because at this stage few other teams have faced two teams rated in the top third. The Gold Coast midfield and Essendon defence also push up the averages Hawthorn have faced, although it must be borne in mind that the Hawthorn games themselves contribute 25% of the weight to those teams’ ratings.

We deliberately factor in no historical data in these ratings, so the strength of each team can take a while to settle down. It also means the best 2016 sides get zero credit as tough opponents if their forward, midfield and defensive data in 2017 does not warrant it. This approach makes the early season jumpy, and it means we’ll have a better picture as the season progresses. Just like what happens in reality.

As we are now into our second week of tracking the HPN rating we can start to track the sides that are on the improve as shown above. We can see the week to week movements by teams, which is basically jet fuel for HOT TAKES. 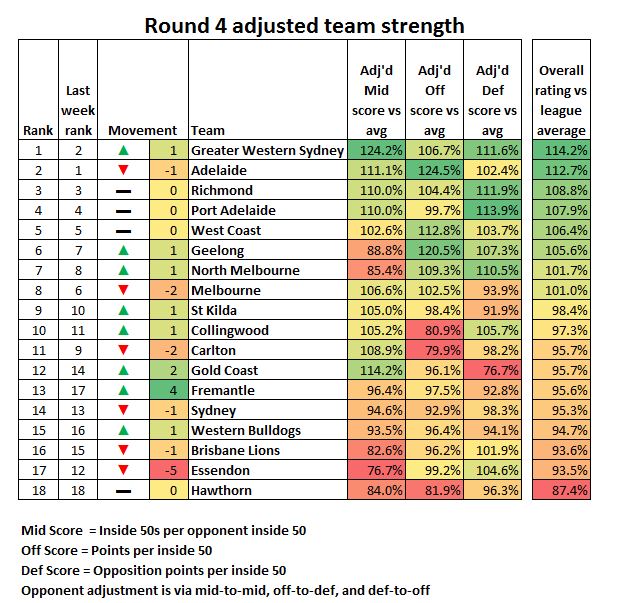 North’s draw of Geelong, GWS and West Coast is clearly the hardest set so far, which has a major impact on their standings in our ratings – their competitive performances against good sides mean they rate well. While Hawthorn do look abjectly terrible, we caution against pessimism regarding the Kangaroos until more form is exposed. They might be okay. Might.

While most would rate the Bulldogs as another tough opponent for North, we currently beg to differ as the above chart indicates. The reigning premiers (this still feels strange to type) have seemed pretty scratchy thus far. Nothing about them currently stands out as terrible, but their performances to date look below the league average in all three areas of the ground, once their soft opponent set is factored in. Sydney, Collingwood and Fremantle all sit bottom half, scaling the Dogs’ ratings down with them.

Fremantle bolt up the ratings this week after beating Melbourne, while Essendon continue to slump as the win over Hawthorn loses its shine and more results come in. GWS, the presumptive pre-season premiership favourite, have claimed top spot by virtue of a solid defeat of Port Adelaide. Whilst Adelaide beat GWS in round one, GWS’s performances since then have been enough to make up the deficit on the day. The two form teams of the competition don’t face off again during the season, so we will likely have to wait until finals for the (already) highly anticipated rematch.

Richmond have mostly beaten up on poor sides (Collingwood, Carlton, Brisbane) but have done it well, and their defeat of West Coast looks good. We’re still not sure they’re as good as third in the competition, but there’s no evidence to the contrary yet.

The Giants’ midfield is their strongest area relative to league averages, while Adelaide continue to reproduce their 2016 offensive prowess – they are simply an amazing side at converting inside-50s into scores. The best defence, currently, is somehow Port Adelaide, and we’ll be fascinated to see if this holds and to try to explain why if it does.